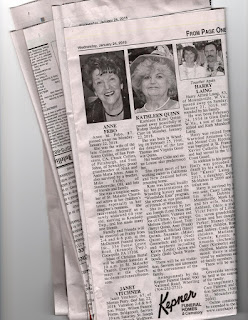 We lost a great friend Monday January 22, 2018. Kathleen (Kate) passed away in the Bishop Hodges Continuous Care facility in  Wheeling.
One of her favorite projects was "Woodsdale Kids". She enjoyed putting on the picnic every few years. She inspired many of us to share our experiences and remembrances by writing for the blog.  It made me remember times that were very dear to me. Because of this blog I connected with others in the "neighborhood". I will miss you Kathleen.

Woodsdale Kids All Grown Up!


Having just immersed myself in three days of the Class of '64 Triadelphia reunion, I'm thrilled to report that I had a great time and it was well organized.by a great committee. I was also delighted that so many people knew about and read this blogsite.  I begged and pleaded for people to write up their memories, and am keeping my fingers crossed that they do.

I was very reluctant to go to this reunion as the last one I attended (at the Alpha '94) I hated not being able to recognize people and there were so many that even when they told me their names, I still had no clue who they were. But this time it was different. Sally Hess organized a small group to get together at their cabin at Oglebay, and I spent a pleasant evening getting caught up with people that are MUCH more interesting than they were in high school. I didn't recognize my old Woodsdale friend Sherry Rosen at first, but eventually we talked and talked.

What I found most fascinating was not past memories, but how these people had led such productive, successful, lives. By the last night at Stratford Springs, the love and friendship in the room was almost palpable. I held hands with Lois Klabano and was not embarrased to do so as we poured our hearts out to each other. Kathy Minor was also another who made me feel like not a day had passed since we rode bikes, sat on her bed and talked, and generally had fun together.

There were many there who I did not know well in high school, didn't recognize their names even from the tiny name tags whose small print made one practically put her nose on their chest to be able to read their name. I apologize if I didn't get to talk to you personally, I did my best.

One of the perks I really liked was finding that people I adored in school and people I did not really know well, were living in Wheeling and I could see them whenever I wanted! Jean Fleming fits that category and Jim Byrum.

The In Memoriam part of the program brought tears to my eyes. So many good people gone forever.And then there were those who have become recluses ....Ed Bachman and others who just did not come....Cheryl Recht. that would have added so much to this gathering.

I am going to hold on tight to those I reconnected with and will cherish the memories of those three golden days.
Posted by Quinn Kid at 4:36 PM 1 comment:

SNOW DAYS!
I've been taking an informal survey among people who grew up in Wheeling and went to school here to see whether I could find anyone who remembered even one day when school was cancelled due to snow. So far no luck.
On the most frigid days, when the air hurt your lungs when inhaled, we stood at the bus stop with woolen "leggins" under our skirts on our way to high school. Of course, they were stashed in our lockers as soon as we got there.
I do remember one day when we were sent home early from school because a big snowstorm was predicted and it was pretty certain that those kids who lived way out in the countryside would not be able to get home if we did not leave early.
Even THE BIG SNOW of 1950 occurred conveniently over Thanksgiving weekend and we missed no school.
In my survey-taking, I met a man from Erie, PA. He said the rules there were that it had to be -75 deg and four feet of snow before school was canceled, I believe him. 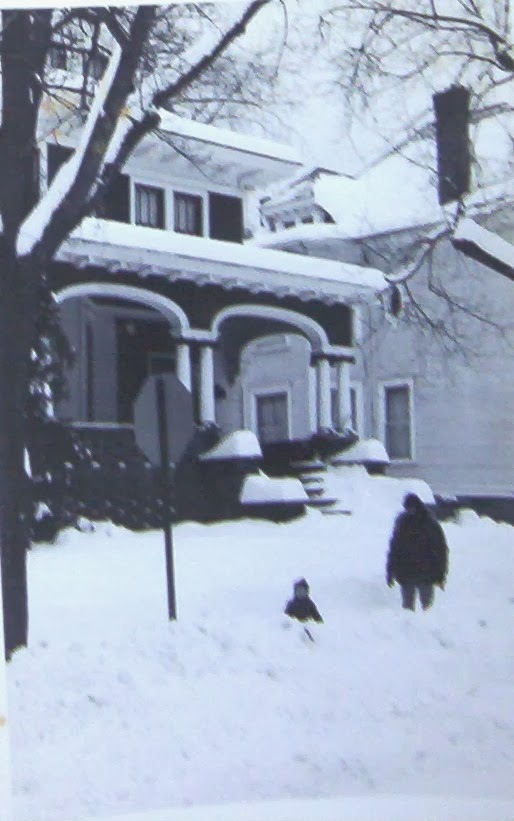 Many,many years ago, about Christmas time in the Quinn household, my father discovered a strange object in the back of the closet where he hung his coat and hat. It  was sort of question-mark shaped, had a big bow on it, and was about five feet tall. He was puzzled..

When he asked what it was, my sister Amy and I told him it was a secret and it was his Christmas present. It wasn't really, but he was always asking us what we were getting him as a gift so we thought we would have a great laugh. The object in question was actually a "shepherd's hook" that we had made for Amy's Little Bo Peep Halloween costume. It was made from an old broom stick, a coat hanger, newspaper, wrapping paper, and ribbon.

So, as the holiday progressed he was constantly asking for hints as to what it was. On the day he opened the "present" and when he got down to the stick and hanger, he could not figure out what it was...so we told him it was a "chicken catcher'...the curved hook of the hanger slid up and down the stick for distance.

We got such a laugh out of it that it became a tradition to give my Dad some weird funny gift for Christmas each year. The next year one of us found an object that to this day I don't know what it was, but made a great gift. It was made of cast iron, shaped like a half of a hollowed out pear, and had a screw assembly through it. His demand for hints made us really puzzle for answers. We thought perhaps it was some kind of nut cracker. But no one ever was able to figure it out....neither did my father who we thought knew everything.

One gift was really imaginative. We got him three bottles of Old Spice...each had two tiny handles on them as part of the design, so of course, the hint was...'It has six handles".  We all laughed while he tried to find the answer to that one.

Christmas at the Quinnery was always fun!
Posted by Quinn Kid at 2:19 PM No comments:

Woodsdale Kids have Kids who have Kids...show us your best shot. 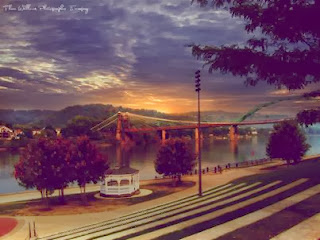 Woodsdale Kids have Kids and Grandkids

Yes, this is a  real pic of  Heritage Port in Wheeling with both bridges shown and the gazebo,and always the river. Not sure who took this pic, but it is sooooooooooooo romantic all in the pastels of sunset

Wouldn't it be wonderful to see the families of old neighbors on here? Christmas photos with the old gang and the new additions?. A brief summary of where you live  now and whether you enjoy it.

You can send those pic to Howdy or me be sure to say who is who for each pic. I'll be happy to post them. Howdy's address is the one at the top of the blog, mine is katequinn5@frontier.com.

It is getting harder and harder for me to continue to write articles for the block, especially when I get no feedback or comments. I did learn that yes indeed Woodsdale had a 9th grade at one time.....there are so many interesting stories I could tell you about Gulliver my goat, wild parties in New Zealand, how I got to be an honorary Maori, but none of those have any thing to do with Woodsdale. We have wracked our brains trying to get people to share memories of Woodsdale and yet I have still ended up being the main writer...that was not my intent when I started. Perhaps Ill have better lucy getting all of you to tell me where you were when you heard JFK was dead?

In any case,you only get out of something what you are willing to put into it.So have a go, at least post a few pics.

Thanks and hope the season leaves you with warm memories,

STUDENTS ON STRIKE AT WOODSDALE!

According to Carl Basham , in 1965 his 9th grade year at Woodsdale Junior High the students went on strike. Carl stated that the walk-out was over a dress code regulation. He alsosaid that the students went out to the playground and Mr. Dan Hyle, the principal at the time, came out, pointed at one girl, told her to go inside and the rest followed.
I cannot find anyone else who remembers the incident and I do not ever remember Woodsdale having 9th grade classes, but that does not make it any the less true. If you remember this incident please comment below.
Carl also said that the music books he was provided at Woodsdale were two years behind those he had used in Ohio.
He remembers Gib Lamb and Max Lebow as his close friends and stated that he was told Woodsdalewas settled by the Jewish Community...according to Carl the evidence for this was the fact that the neighborhood had both a temple and synagogue. Sorry, Carl, untrue...Woodsdale was part of Archibald Wood's estate.
Does anyone remember Woodsdale having 9th grade classes? Please let me know. 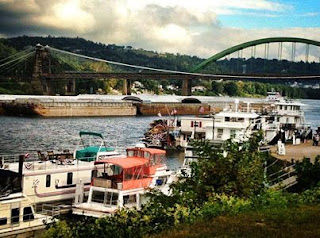 How things have changed!

This is a photo of the Riverboat
Festival now at Heritage Port, you know, where that ugly monstosity called the Wharf Parking Garage used to sit. Wheeling now has a festival every weekend in summer! And in the background both our 1849 Suspension Bridge and the Ft. Henry Bridge.
Who would have thought our close-knit, sacred homeland of Woodsdale would need a Neighborhood Watch or Woodsdale United to fight greedy land grabbers from destroying Stratford Hill?
Who would have thought the house I grew up in on Poplar would be used as a movie set in the new film (available on DVD) called "The Pledge". Seeing the attic where I used to sleep gave me chills, but the view from the street at night was so beautiful, I almost cried.
Who would have thoughts the citizens of Wheeling would pool together and win a national contest for a dog park? That $25,000 will be used toward the effort and thousands will benefit.
Who would have thought that it was FIFTY years ago I graduated from high school and that next year I hope to see some pretty special people at the reunion? I never would have predicted back then that I would spend the next 32 years away from Wheeling. Now, here I am having been back for twenty years and considered an expert on local history....now, THAT'S amazing.
Oh, if only we had had a crystal ball back then to look into the future, I doubt that anyone would have believed the changes!
Posted by Quinn Kid at 8:41 PM No comments: